Especially in the early days of the Bonn Republic, the spectre of ‘Weimar’ was used to express the fear of a democratic political system giving way to political extremism and the establishment of a dictatorship. Fritz René Allemann’s book Bonn ist nicht Weimar, published in 1957, is just one example which illustrates how concern over the stability of German democracy continued to linger in debates about the stability and the democratic credentials of the West German state. These concerns seem to have re-appeared just recently in the context of increased hatred and violence towards refugees visible through protests and arson attacks. Xenophobic, far right ideas seem to enjoy a revival in Germany and have become institutionalised through Pegida and the AfD.

References to Weimar in the public discourse suggest that the collective memory of Weimar is resurfacing in the context of these developments. The renowned historian Norbert Frei, for example, expressed his concern in an interview with Die Zeit (12 November 2015) in which he identified an ‘increasing, fundamental contempt for democracy, the “system” and the “political parties of this system”’ which he describes as ‘highly dangerous’. While he believes that a ‘new Weimar’ is avoidable, other observers are not so optimistic.

This talk will examine the return of ‘the spectre of Weimar’ and analyse these references in terms of their contribution to an assessment of the current state of German democracy.

Ruth Wittlinger is Associate Professor in the School of Government and International Affairs at Durham University, UK. She has published extensively on memory and identity in post-unification Germany and Europe. She is author of the monographGerman National Identity in the Twenty-First Century: A Different Republic After All? and her research has been published in a number of journals including West European Politics, Nationalism and Ethnic Politics, German Politics and German Politics and Society. In 2017, she was awarded a Lady Davis Visiting Professorship at the Hebrew University of Jerusalem. 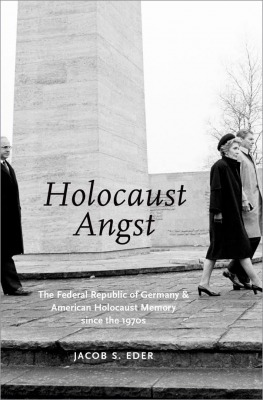